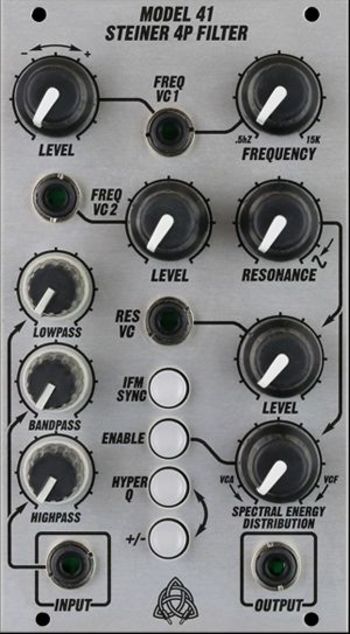 In June of 1992,  Nyle Steiner designed an updated version of the filter found in his SynthaSystem,  a revision that was  never fully completed, and intended for his EVI.  In the fall of 2008 the Model 41 began as a joint effort with Nyle Steiner based on this design and slated as a limited edition module to celebrate the 5 year anniversary of Plan B.

As with other modules planned for that year, the M41 was never released.In Jan of 2014 the collaboration resumed with a few design additions suggested to him:   IFM SYNC (the ‘twin’ function found in the M11), a HYPER Q Regeneration function, a +/- bipolar VC input, VC resonance and level independent lowpass, bandpass and highpass operation, along with all benchmarks true to the original EVI Filter design including a variable intensity control (Spectral Energy Distribution), a four pole 18-stage diode ladder for 24dB/ oct response, output oscillation bandwidth of .5hZ to 16kHz suitable for LFO or VCO applications, user-scalable 1VOLT/OCT tracking, and full incorporation of integrated verses discrete transistor amplification architecture.

Renamed the Steiner 4P,  the net result of this old and new technology pairing has produced a split personality which duplicates all the grit of the original design taken to levels of distortion and deformity never before possible in a Steiner core. 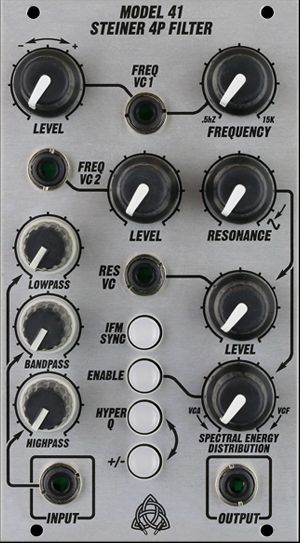