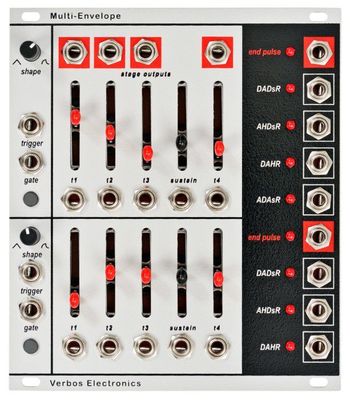 The Multi-Envelope is divided into two envelope generators, one at the top and one at the bottom.

The Multi-Envelope is divided into two envelope generators, one at the top and one at the bottom. The “gate” and “trigger” inputs on the left are where sources can be plugged in to turn on the envelopes. A “trigger” simply starts the envelope at the beginning and lets it run through completely. A “gate” holds the envelope on the sustain stage as long as it’s high. These inputs may be used together or separately to get the re-trigger characteristic desired. The button is a manual gate control.
While the envelope plays, multiple shapes are available at the right. In the each envelope, Delay Attack Decay sustain Release, Attack Hold Decay sustain Release, and Delay Attack Hold Release are available. The upper envelope adds Attack Decay Attack sustain Release (a unique echo type envelope shape) and “stage outputs” which are gates that go high while each stage is active. Both envelopes have an “end pulse”, which is a 10ms trigger that goes high when the envelope completes. The “end pulse” can be patched to the “trigger” input to loop the envelope.
Shape and Time Control
The length of each stage is controlled by a red slider. The sustain level is controlled by the black slider. External voltages can be added to these controls via the jacks below the sliders. The “shape” control changes the envelope from linear ramps to RC type curves as it is turned clockwise. Changing the “shape” will not significantly change the length of the envelope. 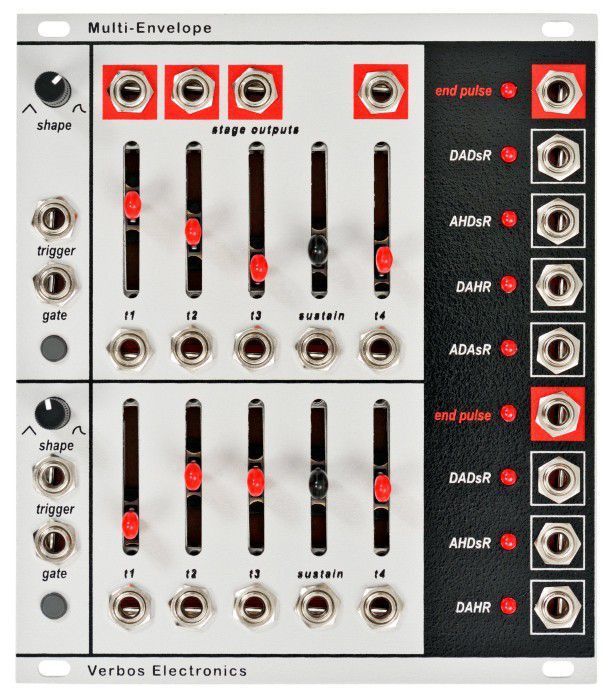