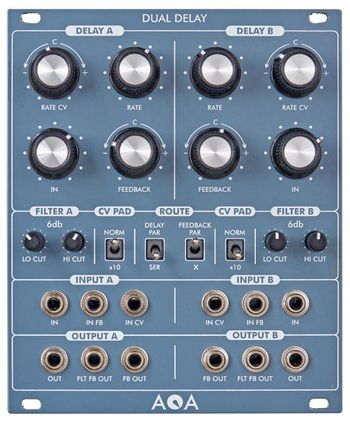 The Dual VC Delay consists of 2 equal, independent delays A and B, each with it´s own feedback loop.

Each contains a 6dB HP and a 6dB LP filter (not VC), but the internal feedback loop can be opened by patching a cable into the „IN FB“ - jacks to route other signal-processing modules into the feedback-loop. Please note that there is no „Dry-Signal“-path. By designing the module, we thought, it would be mostly used in combination with other modules to achieve some echoes and reverberated ambience, one could put one delay in the feedback-path of another delay for example – there are many different routing configurations, achieving strange modulated reverberated space by combining several Dual VC Delay-modules in various manner.
Due to it´s vast flexibility, the module offers load´s of possibilities for hours-longing sessions of mangling signals, pitch modulation and the generation of phantastic ethereal outer galactic spaces. Used in parallel/stereo-mode, it generates voltage controlled modulated spatial effects with it´s own special character. The sound of the Princeton PT2399 delay chip often reminds for BBD-circuit´s which principle in fact shares similarities with the function of the PT2399 chip. Because the audio -and CV - input´s are normalized in the scheme of A=>B, the module is following your needs for many different patching situations easily. The sonic possibilities of using several module together can be mind blowing, especially when the almost endless possibilities of different feedback-routing are explored.
Features
Delays can be routed in parallel or serial configuration (A => B or A II B)
internal feedback with a 6dB HP and LP filter in series for each delay, feedback signals are attenuverted
using normalized feedback in and out jacks, the feedback loops can be opened to insert other stuff
feedback can be switched between parallel and cross routing between A and B
Audio input attenuators for each Delay 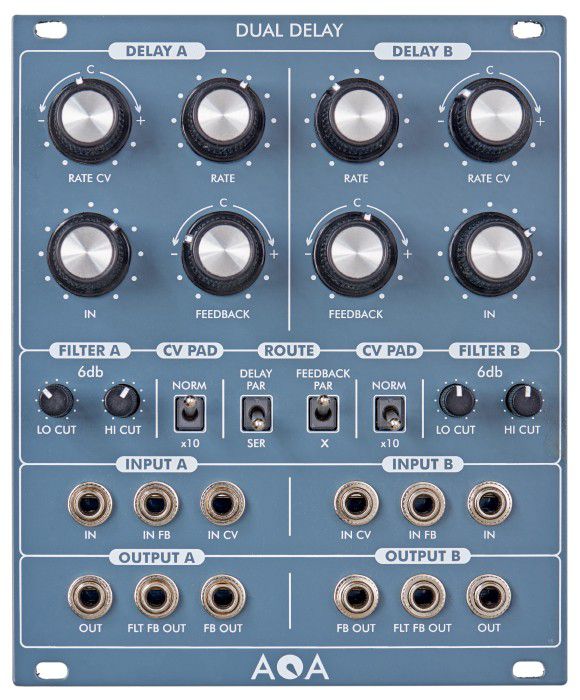