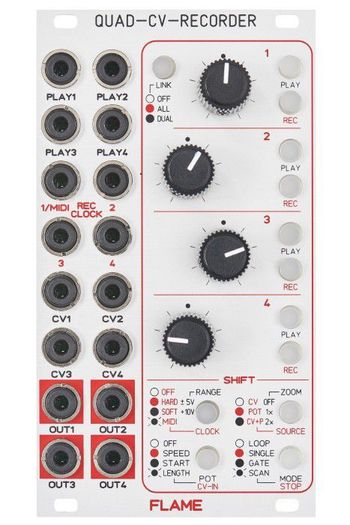 Four-channel recorder/looper for recording and playing back control voltages or potentiometer movements in a very wide frequency range, from very slow to fast. The output is a smoothed voltage without audible increments due to an algorithm with 16 bit resolution.

Four-channel recorder/looper for recording and playing back control voltages or potentiometer movements in a very wide frequency range, from very slow to fast. The output is a smoothed voltage without audible increments due to an algorithm with 16 bit resolution.
Synchronization via clock or MIDI and "punch-in" recordings are possible. The recording time per channel is up to one hour (such us MIDI clock) independent of selected sync mode.
Four independent channels are used for recording control voltages from analogue sequencers, LFOs, envelope generators, joysticks as well as potemtiometer movements. It's possible to record/playback CVs in 16 Bit resolution either in the -5V ro +5V range or from 0V to +10V. You can set the range invidually for each channel.
SOURCE determines the record source. This can be the CV input, the potentiometer or both. ZOOM is a two stage fine adjust function of the control ruler.
Playing back the tracks can happen manually, via a Trigger, a Gate or via MIDI Start/Stop. Following modes are possible: LOOP, SINGLE (one shot), GATE (gated playback) and SCAN (CV scanning). Using the SCAN mode, the recorded sample can be scanned via CV input or the pot of the channel. It is possible to maually play the track velocity and direction (feasible effects: reverse, randomized, stuttering).
There are a number of possibilities to manipulate track playback. After the recording you can change the START point, end point (LENGTH) and playback SPEED or determine if the loop is set with the CVs or pots.
Using the LINK function it is possible to group channels for multitrack or joystick recording: ALL allows for using all four channels individually. In DUAL mode tracks are grouped in sets of of two or four tracks at any one time (e.g. for simultaneous recording of X and Y axes of a joystick).
Synchronization via clock or MIDI and "punch-in" recordings are possible with individual settings per track and with automatic detection of the clock frequency (number of clocks per quarter). When synchronising to MIDI Clock (96 pulses per bar) you can record up to onehour. The HARD/SOFT setting uses different levels for the CV interpolation in Clock/MIDI sync mode.
The memory is non-volatile, as such the recordings and settings remain unchanged when the modular system is powered down. Software updates are possible via MIDI sysex dump. A MIDI adapter is included with the unit.